The hidden costs of the big lap (so far). And we haven't even left yet

Tomorrow we head off on our lap. It's hard to believe that it has all come together and we can actually live this dream. These past few weeks months have been hard. Saying goodbye to friends in Malaysia, imposing ourselves on family (for which we are SO grateful) while we get ourselves organised, researching, hunting and buying, buying, buying. We knew that the set up would cost a bit of money, but the cash hemmorhage just doesn't seem to end. First it was the caravan (yes, we bought a new one instead of secondhand, and we paid more than we intended, but we were happy with what we got and can somehow justify the expense because we'll get more back on resale, hopefully!!), then there was the car. Then there was everything else on top of that...

The camping gear: tent (75% off the marked price from Anaconda - but Anaconda always seems to have a sale, so these tents may always be 75% off), extra tent pegs as we'll be camping in sand at times, mallet to hammer in pegs, seam sealant (the tent was cheap, I don't trust it to keep us dry!!), airbed (we had two singles, so just needed one more double), pump to inflate the mattresses, sleeping bags, camp stove, gas bottle, cast iron camp oven, and more.
The car gear: compressor for inflating and deflating tyres, four new tyres, servicing, a list of things the mechanic says we will need sooner rather than later, recovery gear in case something goes wrong (will we know how to use it??), 12v fridge/freezer for camping, tools (will we know how to use them??), and more.
The caravan: anti-theft lock, padlocks for the gas bottles, plastic storage boxes to store everything, Ziegler and Brown bbq, pillows, kitchen utensils, food, cleaning products, toilet chemicals, first aid kit, snake bite kit, fans for free camping when we can't use the aircon, washing machine, stoneguard*, towing course and towing mirrors**.
The fun stuff: bikes for the kids (including new helmets, lock, spare inner tubes, tool to remove the bike tyres, and still need to go back to change the front wheel of Arlo's bike to a quick release), Springfloats, cricket set (we weren't looking for one, but there was one for sale at the Salvos store for $1).

And there's so much more. We're still debating where to put a bike rack (on the car or on the van, and if on the van, at the front or the back, and if on the car, do we use a Pacific frame that can attach to the tow ball while towing the caravan, and will that put too much weight on the tow ball or do we just put the bikes in the back of the car and will they fit....?). We're wondering if we need to get a snorkel fitted (that's a quick $700, but don't worry, they'll install that hollow piece of plastic for that price too!!).

We've bought a lot of things on Gumtree and Facebook Marketplace. Got a great deal on the Ziggy, got excellent sleeping bags for the kids, a super cheap camp stove with gas bottle (that was out of date and was going to be cheaper to buy a new one than get that serviced, so we donated that), four 10L water bottles for free, and more.

We've been in and out of op shops constantly over the past week. Teatowels, regular towels (to wrap things that might break), laundry baskets, cooking utensils have all come from there.

Ikea did well out of us for a lot of our kitchen and bedding needs.

We've also bought a lot online (washing machine, cast iron camp oven, Kölner fridge) and become frequent visitors to Anaconda, BCF, Down Under Camping, Super Cheap Auto, Bunnings and Jaycar. Sure, we've bought some things that weren't vital (such as solar powered garden lights that we'll put near tent or awning pegs, or the camp oven that we'll be cooking damper in) but still, the list of necessities just seems to grow rather than shrink over time.

*Geoff bought a stoneguard from a guy on Gumtree. As soon as he got it home we wondered how we were supposed to attach it, and after looking at pictures of other stonguards, I was convinced he got one for a camper trailer and not a caravan because it was too small. Yay, that's another $120 wasted... though thankfully the seller will take it back, so then we'll go to a proper dealer.
**We did a great towing course yesterday, though the first thing the instructor said to us was the towing mirrors we had bought (from Super Cheap Auto) were crap and he just happened to have a set of proper mirrors he'd sell us, so the towing course was instantly $150 more expensive (but he had a point, even I could see his mirrors were so much better). Happily, SCA gave us a no questions asked refund.

Then there's the biggie. We bought a 2006 V8 petrol Landcruiser. Petrol. Currently fuel prices are hovering around $1.50 per litre, and that's in the city. That's one thirsty car towing around 3 tonnes all around the country. Perhaps we need to pick up seasonal work as we find it to fund this trip.

We've been back in Australia for nearly two weeks now. I keep telling myself we're home, but really, home feels like 6,000+ kilometres away. We're all doing it a bit tough here. The kids have their sad moments, usually to do with missing Malaysia, our house, our friends, and I feel the same. I knew this part would be tough, and it isn't any tougher than I expected, and I know we've just got to push through and finish all the awful preparation before we can really get started on our trip.

After three days in Australia we bought our van. We had done all the research on second hand vans and knew what we wanted - only to end up buying a new van! We got a good deal (end of financial year) though there was a fair bit of compromising and I am waking up in the middle of the night wondering where we are going to store everything (it's a pretty small van for a family of 4), why did we agree on a van with no bathroom sink (though it does have a toilet and shower...), and what do we do about fans in the van for cooling us at night when we're off-grid and can't use the air-conditioning (since our van has already been built, it's apparently a bit of a problem to retro-fit fans exactly where we want them). But we love the van and we collect it on the 16th, after which we can share more details.

A few days ago we bought our tow vehicle - a 2006 Landcruiser. We picked it up yesterday and took it for a test run to the Gold Coast (not because we wanted to - we needed to return the rental car). The car is big, and very thirsty, but it'll have no issues towing the van, so we're happy about that.

Today we got the kids wheels of their own. Two new bikes that are finally the right size for them; in Malaysia they had both been riding bikes with 16" wheels for far longer than they should have. They spent the rest of the afternoon riding up and down the street, working out how to change gears and getting the hang of big bikes. And yet, Galen still got a bit sad, and said he wished he could have bike races on his new bike with Dylan, our neighbour in Malaysia. 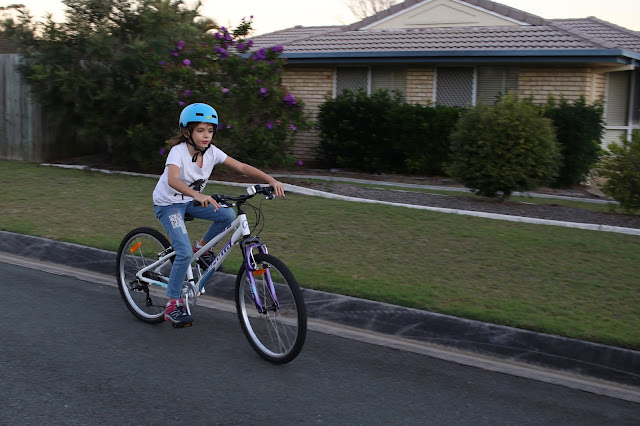 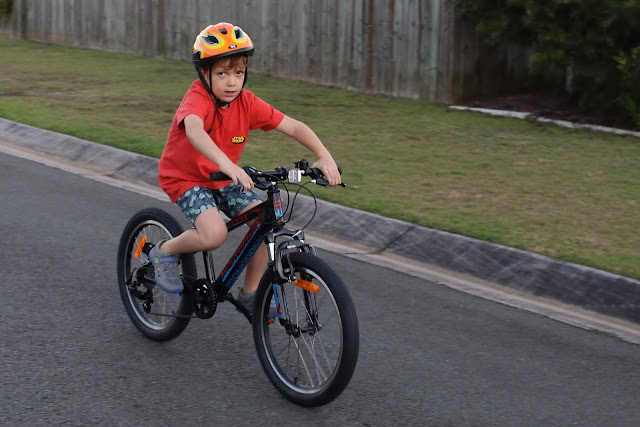 All the new toys are not making the transition from a fairly sedentary life in Malaysia to a nomadic life in Australia easy or fun, but once we're fully on the go, it's hopefully going to be all worthwhile.

looks like some people are getting excited about our upcoming adventure

The kids loved playing with Apple clips to create their movies, they plan on making quite a few this year